Interactive Mode (IR)
IR mode allow you to not only render the model as a static image but also interactively move the camera around the model, adjust materials and lights, modify the model and see the rendering being updated. Engines that offer Interactive Rendering are: Presto & Adaptive AMC.

Production Mode (PR)
PR mode is used for final rendering where changes to the scene do not affect the final image while rendering. All engines can be used in Production Mode
(Presto, Adaptive AMC, Adaptive BSD, Unbiased TR1/TR2)

Thea Presto is an advanced render engine that has been written from the ground up and is optimised for both GPU and CPU execution simultaneously, harvesting all your computing power. The engine has been especially tuned for fast interactive rendering. This pushes GPU+CPU computing to the limits while keeping the high photorealistic quality of Thea Render.

Presto Settings
Tracing Depth: This is an important parameter for Progressive Engines. Increasing this parameter may be needed for certain cases where there are a lot of mirrors or dielectrics in the scene but it has a direct impact on render times.
Diffuse Interreflection: is a separate value to control tracing depth for diffused surfaces. Setting Diffuse Depth to 0 will remove all light bounces from the scene leaving only the direct light.
Extended Tracing: Extended Tracing can efficiently render scenes with transparent objects or materials with Subsurface Scattering while using a lower Tracing Depth.
Extended Tracing > Transparency Depth: Determines the Extended Tracing Depth for all transparent materials like Thin Glass, Glass and Clip Map.
Extended Tracing > Internal Reflection Depth: Determines the Extended Tracing Depth for transparent materials that have refraction and total internal reflection. These materials are created with the use of the Glass layer (for example solid glass or water). If you notice that you get dark areas on solid glass, the cause is often because of too low Internal Reflection Depth and not due to the Transparency Depth.
Extended Tracing > SSS Depth: Determines the Extended Tracing Depth for Subsurface Scatering (SSS) materials. In some cases increasing this value is needed to increase the brightness of bright colored dense SSS materials. (Not available when Diffuse Interreflection is enabled)
Clamp: Enables or disables clamping.
Clamp > Clamp Level: Clamps the evaluation of a pixel, improving antialiasing. The number corresponds to the clamping limit. Higher than 1, clamping becomes less effective for antialiasing while less than 1 it becomes more effective but also lowering the brightness of the image more aggresively.
Bucket Rendering: Rendering high resolution images with multiple channels is usually an issue for GPUs but with the use of Bucket Rendering implementation, we are able to overcome this limiting factor and improve scalability as well.
Ambient Occlusion: used to mimic a part of global illumination making the engine to render faster.
Ambient Occlusion > Distance: this is the maximum distance that the sample may be evaluated to an intermediate (gray) color. After that distance, the sample is evaluated to white color.
Ambient Occlusion > Intensity: this value defines the intensity of the Ambient Occlusion used.
Interactive Denoiser: Check this option to apply denoising while rendering interactively either in the Viewport or in Thea Darkroom.

Presto Adaptive Tracing
Adaptive Tracing is a technique that solves difficult lighting scenarios, such as caustics from point lights, sun pool caustics and diffuse interreflections. This results in images with a higher dynamic range and lighting effects that were previously impossible.

Thea Render supports a superior unbiased core which is one of the most advanced in the market and delivers stunning images without any compromises. All possible paths of lighting transfers are explored, delivering the highest accuracy without any artifacts. Sun‐pool caustics and terminator artifact are robustly handled offering stunning results.

Unbiased TR1/TR2 Settings
These two engines have no settings and are controlled only by the Sample and Time Limit. Unbiased engine TR1 is optimal for exteriors and scenes with dominant direct lighting while unbiased engine TR2 is optmal for extremely difficult indirect and caustc lightng.

The Adaptive AMC engine is based on the Unbiased TR2 engine but with shortcuts to make it faster. It should be preffered for difficult indirect lighting situations (e.g. indirect caustics) and it can be used in both Interactive and Producton Mode.

Adaptive AMC Settings
Tracing Depth: Just like in the Presto Engine, this is an important parameter for Progressive Engines. Increasing this parameter may be needed for certain cases where there are a lot of mirrors or dielectrics in the scene but it has a direct impact on render times.
Adaptive Bias: Increasing this value, several difficult paths are taken out of computations, making it faster.
Caustics: Removes the caustics path. In general, it should always be enabled. 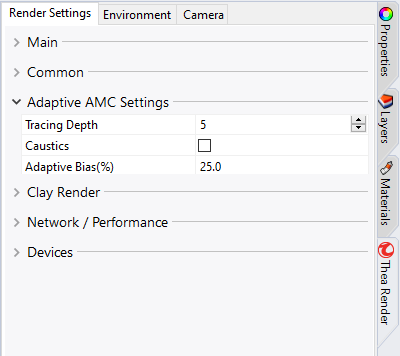